Welcome to  My Journal!

I post things that matter most to me and it’s been a long, and wonderful learning curving getting here. Share. Be inspired. lets Make Mountains Metaphors

Go back in time… 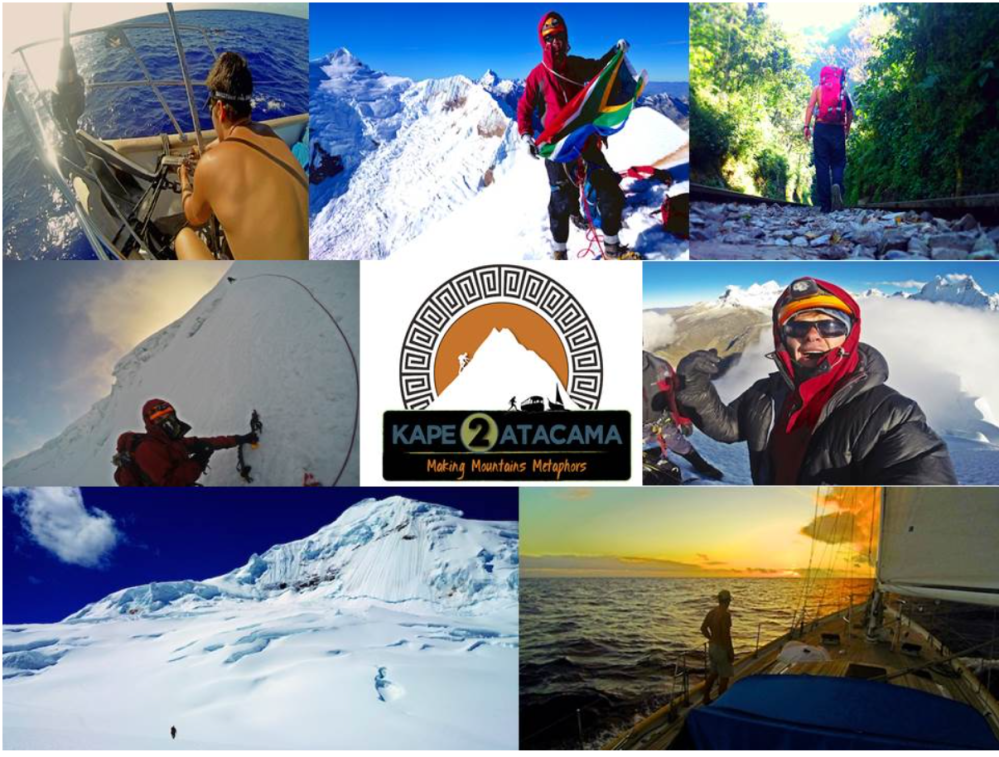 KAPE 2 ATACAMA was next in the My KAPE series of environmentally and socially responsible climbing expeditions.

In February 2014, I embarked on my most challenging adventure yet. Traversing 20 000kms in a little over 6 months, I’d bitten off a little bit more than what I was comfortable with. Add to this the fact that he is intent on travelling the entire route in a sustainable and carbon-neutral way and you can begin to understand the enormity of this task.

I found a yacht last minute to cross the Atlantic Ocean, a journey of 6100km (3800 nautical miles) from Cape Town, South Africa to Salvador de Bahia, Brazil by boat. I then hitched rides, slept in bus terminals and eventually landed in Santa Cruz, Bolivia. Still itching from mosquito bits that I got from the swampy lands of Pantanal I found a way up to the highest capital on earth, La Paz, Bolivia. Before crossing the border into Peru where I ran out of money and got a job at a pretty wild hostel in Southern Peru and then heading to Cusco, home of Machu Picchu and the Sacred Valley. La Paz was the place for my first two objectives- Huayna Potosí (6088m) and Bolivias second highest, Illimani (6438m). Illimani would be a rude awaking to the power of the Andes…

A trip up north to the capital of Peru, Lima followed, after which I made it to the climbing mecca of Huaraz, which has been a dream of mine for ages. The climbs included Tocllaraju (6032m) and Yanapaccha (5460m). I found a new perspective on life. This may sound a little dramatic, but when you get “stood-up” at 5000m, get a stomach bacteria infection and, stupidly, take on another peak, and then climb something that I never expected to take on- that is, in a nutshell, the reason for this emotional and mental shift.

This is a brief summary so go to the K2A Blog to see the highs and lows of a journey that changed his view on what is possible and how I did it.

I only travelled by basic public transport (nothing chartered) and sustainable means, such as trekking, sailing, cycling and hitching. It’s also known as ‘carbon neutral travel’ where you’re not adding another motorised vehicle onto the road.

“This journey was unscripted and unpredictable. Well, if it wasn’t, it wouldn’t have been an adventure.”

So, if you want to see the highs and lows of this adventure, click here